Start a Wiki
This article is about Coral, the character from Lords Mobile game. You may be looking for other characters named Coral.

Coral the Songstress of The Sea is a playable mermaid hero in Lords Mobile game.

Hoping Coral could join him on his adventures, Icarus offered her a potion that would turn her human. But she was hesitant to accept it. In her dilemma, the pirates captured and brought her to land. To stay alive, she drank Icarus' potion and thus lost her ability to live underwater. Since, she never stops dreaming of the day when she can return home again. 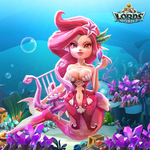 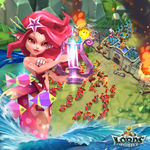 Retrieved from "https://mermaid.fandom.com/wiki/Coral_(Lords_Mobile)?oldid=23789"
Community content is available under CC-BY-SA unless otherwise noted.