Crystal is a mermaid in Fin Fun's Mermaidens stories.

Crystal is the Mermaiden of the Arctic Ocean. Her kingdom is way up north where it’s very, very cold.

Her father is king of the Arctic Ocean, so that makes her a princess. But Crystal is pretty shy so she doesn't really like all the attention she gets. But she's happy that she gets to be the one who talks to you humans!

She has heard that some oceans are so warm that people come from far away just to swim in them.

When she was 15 she got to travel with her father to the North Atlantic Ocean and meet with the royal family that rules that seadom. The princess there is named Brynn. She’s the royal Mermaiden of the Celtic Sea, so Crystal is sure you’ll get to meet her, too. She is great! She has crazy red hair, emerald green eyes and lots of freckles. Oh and she has a finfriend seal who is so funny and cute! Anyway, she and Crystal totally have a blast whenever we’re together. She created huge ice sculptures and she uses her power to make them glow!

Well, as you must know, penguins aren’t from around the Arctic. They mostly live in Antarctica which is far away in the seas near the South Pole. So you can imagine how surprised Crystal was when she found a tiny little penguin all alone floating on a piece of metal near the human ship docks. He was so small and sick, she just knew he needed her. So Crystal sculpted a little ice boat for him to rest in while she towed him back to her castle. Mermom and Merdad didn’t think he would survive without penguin parents to take care of him, but she mashed up krill and sardines into little bits he could swallow and fed him by hand. Soon he was growing fast and catching fish all on his own.

He’s a great little finbuddy, but he has one problem you should probably know about. He thinks he’s a bird. Well, Crystal guessed he kind of is a bird, but he thinks because he has wings he should be able to fly like the puffins and seagulls and other arctic birds. She has tried and tried to tell him his wings aren’t really meant for flying—but he just won’t believe her! He always seems to be in some kind of trouble, jumping off castle ledges and rocks and well…everything.

He’s pretty silly, but he’s Crystal's Pepper and she loves him anyway. 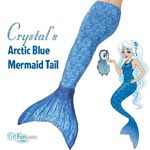 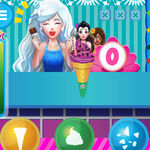 Retrieved from "https://mermaid.fandom.com/wiki/Crystal?oldid=21908"
Community content is available under CC-BY-SA unless otherwise noted.