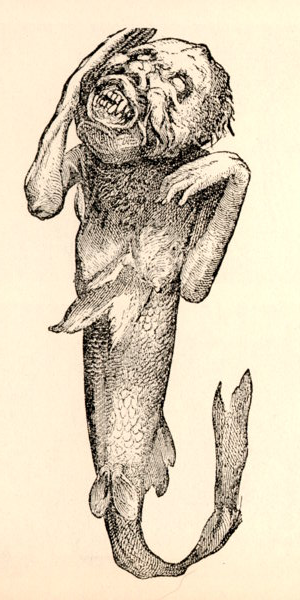 The Fiji Mermaid (also Feejee mermaid) was an object comprising the torso and head of a juvenile monkey sewn to the back half of a fish. It was a common feature of sideshows, where it was presented as the mummified body of a creature that was supposedly half mammal and half fish, a version of a mermaid. The original had fish scales with animal hair superimposed on its body with pendulous breasts on its chest. The mouth was wide open with its teeth bared. The right hand was against the right cheek, and the left tucked under its lower left jaw. This mermaid was supposedly caught near the Feejee Islands in the South Pacific. Several replicas and variations have also been made and exhibited under similar names and pretexts.

Retrieved from "https://mermaid.fandom.com/wiki/Fiji_Mermaid?oldid=21053"
Community content is available under CC-BY-SA unless otherwise noted.