King Firtf was the King of Tritonis and wanted to conquer Poseidonis. He was succeeded by Iqula. King Firtf first appeared in Aquaman #3 - The World Around Them and was created by Shaun McLaughlin and Ken Hooper.

In Tritonis, the warrior known as Iqula killed a shark, then berated another Tritonian for leaving an injured man behind. He took his concerns to King Firtf, who told him that the war in Poseidonis has brought sharks to both cities. Though Iqula shared no love for the citizens of Poseidonis, he petitioned King Firtf to provide them aid. King Firtf feels that Poseidonis is vulnerable and ripe for conquest. He orders Iqula to lead the army to take the city. 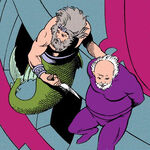