Hanon has appeared in many anime episodes.

Hanon, unlike Lucia, came onto land to escape from water demons. They destroyed her kingdom, and the mermaids that had been living in it fled.

Hanon first meets Lucia at school, in episode one of the anime, where they become best friends.When Lucia and Hanon met Rina, all of them became best friends. Hanon falls for their music teacher, Tarō Mitsuki. She adoringly refers to him as "Tarō-chan". She also owns a pet jellyfish named Purachan.

Later, after Gaito is sealed back in his castle, Mitsuki decides to fly to Germany to study music and love and leaves Hanon some sheet music. After almost losing it, it is collected by a boy named Nagisa Shirai who is trying to impress Hanon. Later on Hanon begins to have feelings for Nagisa as in episode 31 in season Pure when it is shown that she kiss Nagisa under the starry sky. 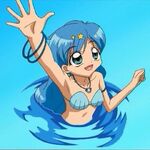