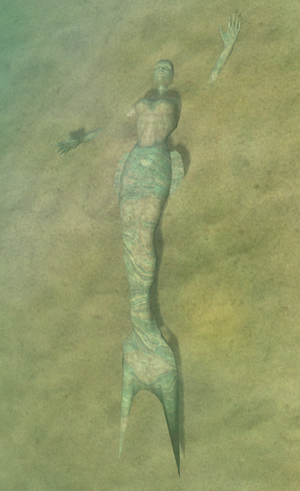 Lasydia is the demigoddess with a form of a mermaid in the world of Norrath from EverQuest franchise.

Lasydia is the demigoddess of rescue. During the Age of Turmoil, she stayed behind as other gods left Norrath and abandoned their followers. Lasydia did the best she could to look out for the people. Lasydia is depicted as a divinely merciful and beautiful. She is the deliverer of the drowned and caretaker of castaways and lost souls.

There is a statue of Lasydia on the Queen's Colony island near the underwater ruins. Where she inspires the travelers to make the surrounding waters safe from the razortooth sharks, and gives them a temporary blessing of water-breathing.

Retrieved from "https://mermaid.fandom.com/wiki/Lasydia?oldid=22109"
Community content is available under CC-BY-SA unless otherwise noted.