The Little Mermaid is one of the playable characters in the game Sinoalice. She is voiced by Mamiko Noto. Her concept is Sorrow.

In a world called Library filled with countless stories, the characters within each story wish to revive their author for their desired future.

When she reached the surface she waited. Soon a ship appeared. The princess showed only her fish tail. A handsome prince sees her tail and is curious to get a better look at the strange fish. Suddenly a great storm appears and sinks the ship. The Mermaid saves the prince and so the Mermaid spins her desired destiny, for it was she who lured the ship into the storm.

The Little Mermaid went to the Sea Witch and asked for a spell to become human. Desperate to dissuade the princess, the Sea Witch tells her that every step would feel like walking on a bed of swords. She warns her that should the prince fall for another, the Mermaid's heart would break and she would dissolve into sea foam. The Witch also asks for her gorgeous voice as payment. The Mermaid was not deterred.

And so, the Mermaid gave up her voice, became human and endured great pain to win the prince's heart. However, the prince's heart had been taken by another woman. While murdering the prince would break the Sea Witch's spell, the Mermaid found herself incapable of such a thing and dissolved into foam. But such paltry feelings of sadness - the tears of a lost love were hardly enough to satisfy her... 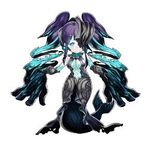 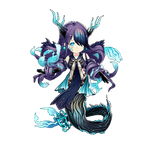 Retrieved from "https://mermaid.fandom.com/wiki/Little_Mermaid_(Sinoalice)?oldid=26319"
Community content is available under CC-BY-SA unless otherwise noted.