Lori Lemaris is a comic book character who is one of Superman's girlfriends. She first appeared in 1959 in Superman #129 and was created by Bill Finger and Wayne Boring.

Lori Lemaris was a wheelchair-bound student at Metropolis University. One day she lost control of her wheelchair and was rescued by Clark Kent (Superman), and soon afterward the two started dating. Unbeknownst to Clark Lori was a mermaid who used a wheelchair on land, and covered her lower half with a blanket. She had to be home at a certain time every night to soak in a saltwater tank so she would always cut her dates with Clark short. Clark ended up asking her to marry him but Lori said no. He knew she was foreign and began to suspect she might be a spy.

Lori Lemaris makes her return when she was spotted by a fisherman, Schmidt, who tells Clark of his encounter. Clark, who had held on to his hope of seeing his love once more, returns to the same area where Lori was spotted, and sure enough she appears. They embrace each other and kiss but soon after the fisherman throws a knife that impales Lori on the back. Severely wounded, Clark scares the fisherman away and decides to take Lori to Atlantis to get her treated. On the brink of death, Lori falls closer and closer to death as the drifts pass through her. Once Clark makes it to Atlantis he hands her over to the doctor. Months later, and after constant visitations by Clark, the doctor tells Clark Lori will live, but will remain paralyzed. Clark, filled with grief, is later given hope when the doctor says there is one man who, although he uses unconventional methods, is able to do miraculous things. Clark decides to take the risk with this man, Ronal.

Some time later Clark returns to good news that Lori had made a complete recovery. He goes off to see her and embraces her in his arms. He notices that Lori doesn't seem as happy. She tells Clark that she has fallen in love with Ronal. Shocked and angered Clark asks Lori how she could have done this to him after everything they have been through. Lori says that the time she spent with Clark will always be cherished and she will never forget their love for one another. She then tells Clark that they cannot be together, for they are from two completely different worlds and she is a mermaid. Clark accepts her decision and leaves broken-hearted. After some time passes by, Clark decides to visit Lori, but once he encounters Ronal he is told that she died defending Tritonis. Clark is shocked and saddened at the fate of his first love. He recounts his time with Lori on the death of her one year anniversary, still bitter that Ronal took her away from him. It is later revealed that Lori's death was a complete fabrication (unknown to Clark); she saves Clark when he collides against a rock and passes out from the lack of oxygen underwater. She then reveals that Clark will always be her true love and that she married Ronal in order to make Clark stop thinking about her, since she knew he belonged on land and with Lois.

Lori in Sin of Youth JLA 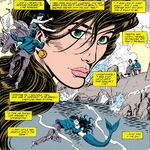