She is played by Naomi Wallace in Wiggle Bay, and by Larissa Wright in Racing To The Rainbow.

Magdalena is friends with Henry the Octopus. In Wiggle Bay, Henry introduces The Wiggles to Magdalena the Mermaid and Captain Feathersword has a dance with her. Later, she throws The Wiggles their ball back and they thank her and as they continue to play ball, she disappears in the waves.

In Racing To The Rainbow, she has a song about her titled, The Princess of the Sea.

Naomi Wallace as Magdalena the Mermaid in Wiggle Bay

Larissa Wright as Magdalena the Mermaid in "Racing to the Rainbow" 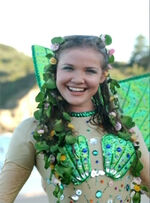 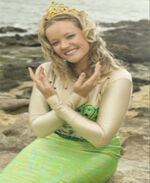 Magdalena The Mermaid in electronic storybook: "The Rainbow Palace"
Add a photo to this gallery
Retrieved from "https://mermaid.fandom.com/wiki/Magdalena?oldid=24196"
Community content is available under CC-BY-SA unless otherwise noted.