Start a Wiki
This article is about Mermaid, a character from The Legendary Starfy game series. You may be looking for other things named Mermaids. 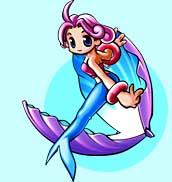 The Mermaid is a recurring character in The Legendary Starfy game series from Nintendo. She lives a giant purple shell that save Starfy's progress in different areas during the game. She also has a collum in the DS game called Mermaid Gossip where she appeared in her chibi state giving hints on what Starfy should do.

She has pink hair, wears a pink top and pink bracelets, and has a light blue tail. Judging by her physical appearance she's most likely to be a teenage character.

Add a photo to this gallery
Retrieved from "https://mermaid.fandom.com/wiki/Mermaid_(Starfy)?oldid=23915"
Community content is available under CC-BY-SA unless otherwise noted.