Start a Wiki
This article is about Mermaid, an unnamed character from Tara Duncan series. You may be looking for other things named Mermaid.

The mermaid is an unnamed character from the animated series Tara Duncan. She appears in "Bubble, Bubble, Toil and Trouble".

A mermaid with green blemishes on her face. She also has the ability to transform her body into a pure water form.

Because of her blemishes, she has been treated as a monster and outcast by others, especially the other mermaids who are normally pretty.

She kidnaps Dr. Flouch in order to contaminate the water that others will drink from or touch so that they may be given blemishes on their face like her.

In the end, however, the Alpha and Beta Team use the cure on her. She, Tara, and Sparrow proudly show the guys (plus Fafnir) their unblemished faces. She is embarrassed when Fafnir calls out on her "going unpunished for her crimes". Sparrow tells her that they are there to help people, not punish them. 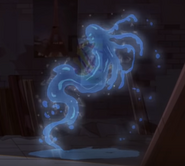 Add a photo to this gallery
Retrieved from "https://mermaid.fandom.com/wiki/Mermaid_(Tara_Duncan)?oldid=19077"
Community content is available under CC-BY-SA unless otherwise noted.