Mermaid Down is 2019 film featuring a mermaid, played by Alexandra Bokova.

Two old trawler fishermen decide to sell a mermaid's body parts for millions of dollars. After a week-long stakeout at sea, a man in a boat sees them catch a mermaid. The man climbs on board as the mermaid escapes overboard.

One of the fisherman dies, but the mermaid is recaptured. Once the mermaid's tail has been cut off the stowaway's presence is discovered.

He barters with the fisherman for the mermaid, before killing him and taking the mermaid's human half away.

The man, Dr. Beyer, a 'psychiatrist', documents the process of the mermaid growing a pair of human legs. Once the transformation is complete, Dr. Beyer places the mermaid in his mental institution for further observation.

One of the patients in the Institution does not believe she is a ghost, despite only one other patient being able to see or talk to them. The ghost discovers that the mermaid can also see her, but when she tries to hold the mermaid's hand, is unable to make contact

Once the mermaid's strange gestures are found to be a form of sign language, the head nurse, Sarah, brings in a translator.

The mermaid explains that pirates were the first people to capture and confine mermaids to live on land. Their descendants taught free mermaids sign language. She also reveals that she will die if kept on land.

Dr. Beyer punishes the mermaid for revealing her true nature, locking her in solitary confinement. The ghost, following close behind is also trapped inside. A patient, convinced to go looking for the location of the mermaid is unable to hear the ghost's cries for help, and stumbles upon a pit. The dog inside, fed people by Dr Beyer, attacks the girl before she can escape.

Dr Beyer discovers the mermaid escaping in a wheel chair and hits her with his car. Sarah goes into the institution to calm some of the patients where she watches the mermaid restrained and loaded into the back of the car. Dr Beyer rampages through the Mental Institution killing everyone, but is unable to get into the room with Sarah and the remaining patients.

Hearing sirens approaching, Dr Beyer flees the scene taking the car with him.

Sarah loads the surviving patients into a taxi and rushes after the Doctor.

On his boat, Dr Beyer drags the mermaid into a secret compartment, for dissection.

Sarah leaves the patients in the taxi and sneaks into the boat, discovering a photo album recording the torture and dissection of the woman who is now a ghost. Spotting an old revolver, Sarah follows the mermaids pained shrieks and discovers the secret compartment. She shoots Dr Beyer, putting a hole in his hand, before he retaliates.

Sarah and the other patients wash up on a beach, and huddle in a cave to keep warm.

The mermaid crawls into the cave and reveals the ghost to the others. She also reveals that the patient who first saw the ghost is descended from mermaids.

The mermaid returns the the ocean where she drowns Dr Beyer as he struggles to stay afloat. 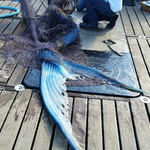