View source
watch 01:25
Jurassic World: Dominion Dominates Fandom Wikis - The Loop
Do you like this video?
Play Sound
This article is about Neptune, the character from Zig & Sharko. You may be looking for other characters named Neptune. 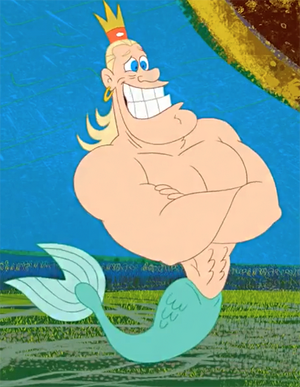 While doing his exercises, King Neptune noticed Marina. Neptune attempted to seduce Marina, but Sharko intervened. King Neptune used his trident to zap Sharko with electricity and had his bodyguard Orcas toss him into a prison. While Sharko was imprisoned Neptune had few run-ins with Zig. Neptune managed to lure Marina into his palace, and gave her dresses and fancy dinners, but marina was getting tired of it and longed for Sharko. Sharko busted through the doors and defeated Neptune, while Zig took Marina away.

King Neptune saw Marina singing and he loved it. Neptune got Marina to sign a contract to record music and sign autographs, and kept her locked up in the tower so she wouldn't break her contract. Marina managed to sneak out and rip the contract in pieces. After marina had left, Sharko came to her rescue, and pummeled Neptune, realizing his mistake Sharko left too, leaving Neptune defeated on the floor.

King Neptune was once seen entering the opera with Manic Mermaid.