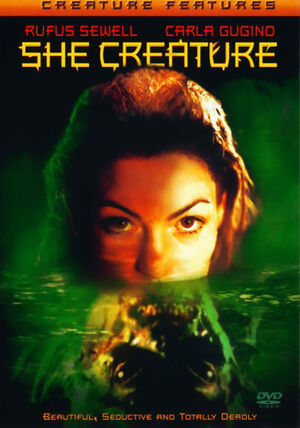 She Creature is 2001 TV movie, portraying mermaids more like monsters. The movie was part 1 of a planned Mermaid Chronicles trilogy.

A while back in Ireland, an old woman goes to the basement of her mansion, with a knife in hand, and get killed by something.

Later a circus is in town, the owner, Angus, and the performers use tricks and illusions to conjure a world of mystery. An old man, Mr. Woolrich, attends the circus, after he heard of a mermaid on display. Disappointed he confronts the actress, Lily. Coming to his senses he apologizes, and turn to leave, but stumbles. Angus and Lily accompany Woolrich back to his mansion, where he tells stories of mermaids. After Lily tells him that she believes him, maybe out of pity, Woolrich decides to show them his prized possession, the She Creature. Angus tries to convince Woolrich to sell the creature to him, but is unsuccessful. He then takes couple of his workers, Bailey and Gifford, and breaks into Woolrich's mansion at night to steal the creature. Woolrich catches them on the act, and has a heart attack, and dies. Angus then takes the creature on their ship to America.

Bailey has trouble keeping the creature quiet on the ship, but that changes when Lily passes by from the hold. Bailey pulls Lily in to avoid prying eyes, which leads Lily and the creature having an unspoken moment of bonding. Lily was bothered by a sailor named Miles on the ship, which she tries to ignore. Lily has nightmares during the night, in which she dreams of Angus being killed by the creature, and she blurts out "No. Not Angus. I told Miles". Her sleep is interrupted by a commotion. It turns out the creature has escaped her cage and was found on the deck by the crew. Angus makes a deal with the captain to keep her on board while the crew cages the creature again. Captain is looking for Miles for some work, but Miles seems to be missing. Lily goes to investigate the commotion, and is left alone with the creature. The creature then spits Miles' ring to Lily as a gift. Lily explains her past with miles to Angus, and expresses her fear that the creature has eaten Miles, as a favor to her, and that the creature has psychic powers. Lily then find the stolen journal that Angus took from Woolrich mansion, and starts to read it. Lily grows more concerned about the creature, and wants to release it. While having intercourse with Angus, Lily goes into trance-like state, while the creature invades her mind. Lily tries to free the creature, but she refuses to leave, and when they are found by Bailey, the creature lunges at him, and kills him. Angus locks Lily in her cabin, thinking she is loosing her mind. After reading more of the Woolrich journal, and learning that Teresa Woolrich got pregnant in her old age, she notices the signs she has had herself, even though she was barren from birth. Lily sneaks to see the creature again, but finds her in a human form. It turns out that the mermaids turn human during full-moons. Unfortunately the creature, now human, is left into the grubby hands of the sailors, who try to abuse her. Thanks to Gifford, she is spared.

It turns out that the creature has influenced the captain to change the course to the home of mermaids. It is then the creature turns into her true form, and Lily who was comforting her is afraid for her life. The creature leaves Lily alive because she bores her child, and proceeds to kill everyone else on board of the ship. In the end only Lily was left alive, the creature was face to face with Lily, and decides to let her live. The creature then feeds the remains of the men to her lair, surrounding the ship.

Two weeks later, Lily is found on a drifting ship, on Wide Sargasso Sea. Lily was thankful that the creature didn't kill her, and rewarded that act with silence of the creature's existence.

Years later, Lily birthed a baby girl, she named the girl Miranda. One time when Miranda was grown quite a bit, and they were floating on water in a rowboat, her eye's glowed red.

Retrieved from "https://mermaid.fandom.com/wiki/She_Creature_(2001_Film)?oldid=23148"
Community content is available under CC-BY-SA unless otherwise noted.