View source
watch 01:25
Jurassic World: Dominion Dominates Fandom Wikis - The Loop
Do you like this video?
Play Sound
This article is about The Little Mermaid, prequel to the film made by Disney. You may be looking for other things named The Little Mermaid.

King Triton and Queen Athena, rule over the underwater kingdom of Atlantica, which is filled with music and laughter. They have seven young daughters, the youngest of whom is Ariel. The merfolk are shown relaxing in a lagoon above water, and Triton gives Athena a music box. Suddenly, a big pirate ship approaches. Everyone escapes except Athena, who is crushed by the ship when she tries to save the music box. Devastated by Athena's death, Triton throws the music box into the ocean and bans music from the kingdom.

Ten years later, Ariel and her six older sisters are not happy with living under a strict routine maintained by their governess, Marina Del Rey and her assistant, Benjamin. Marina hates being the girls' governess and longs to be Triton's attaché, a job currently filled by Sebastian. Ariel hates their current lifestyle, which brings her into conflict with her father. One day, Ariel encounters Flounder the tropical fish whom she later follows to an underground music club. She is overjoyed by the presence of music and is shocked when she sees Sebastian performing there. When her presence is revealed, the entire band stops playing and hides, believing Ariel will tell her father about them. Ariel sings a song explaining her love of music and the remembrance of her mother and she joins the club with an oath.

Ariel returns to the palace, and her sisters confront her over her disappearance. She explains where she was, and the following night all seven girls go to the club to have fun. Marina secretly finds them, and she later reports their activities to Triton. Sebastian, Flounder, and the band are sent to jail, while Marina gets the job she wants.

Triton confines his daughters to the palace and Ariel says that her mother would not have wanted music forbidden. She swims to the bedroom, with her sisters following and telling her that no one is happy except Marina. Marina, who is not the girls' governess anymore, is now Triton's new attaché and is happy with her new job, while everyone is sad and miserable. That night, Ariel leaves Atlantica and frees her friends. Sebastian leads them to a deserted place away from the palace where Ariel finds Athena's music box, as Sebastian hoped.

In the kingdom, Marina happily talks to Triton about her new job but is interrupted by one of Ariel's six older sisters, telling Triton that Ariel is not in Atlantica. Triton orders his guards to bring Ariel back home, ignoring and angering Marina. In her lair, Marina tells Benjamin that she releases her electric eels from the dungeon to kill Sebastian and Ariel so she can remain as Triton's attache. Ariel, Flounder and Sebastian decide to return to Atlantica to bring the music box to Triton, hoping that it will change his mind, as he has forgotten how to be happy after Athena's death.

On the way back, Marina and her electric eels confront Ariel, Flounder, and Sebastian. Before music is restored back into the kingdom, the final battle begins when Marina bans Ariel from going back to Atlantica. Marina wants to stop them so she will retain her position of "power", and a struggle ensues. The music band friends save Ariel and Flounder from being murdered by Marina's three electric pet eels. It ends when Marina almost kills Sebastian, but Ariel pushes her away, getting hit in the process. Triton arrives in time to witness this, and he is remorseful for his actions. He sings the lyrics of "Athena's Song", and Ariel wakes up. Triton apologizes to Ariel for not listening to her and for not answering and sends her back to Atlantica before ordering his guards to arrest Marina.

The film ends when Triton allows both love and music back into his kingdom and appoints Sebastian as the new court composer of Atlantica, much to everyone's glee with Ariel and Flounder. Everyone, including Ariel, Sebastian, Flounder, and six older sisters, rejoices except Marina, who has been sent to prison and is constantly blowing her nose. 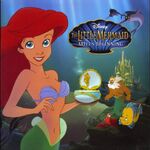