View source
watch 01:54
Obi-Wan Finale - The Loop
Do you like this video?
Play Sound
This article is about Triton, the character from Disney's The Little Mermaid. You may be looking for other things named Triton.

“Never again, will you or your hordes threaten my family! There will be no escape for you! EVER!!!”
―King Triton to Morgana.

Triton is the king of Atlantica and a fictional character who first appeared in the Disney animated movie The Little Mermaid. He was voiced by Kenneth Mars in the first and second films and by Jim Cummings in the third film. His character is somewhat similar to the Greek Mythology sea god Poseidon.

Triton is grandson of Neptune. Triton married Athena, and had seven daughters with her: Adella, Alana, Andrina, Aquata, Ariel, Arista, and Attina. 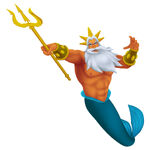