Veronica is the Little Mermaid's older sister and a character in the game Surface 9: Lost Tales.

After the Book of Fairy Tales was torn and lost, fairy tale characters began to disappear. Among them was the Little Mermaid. When the princesses disappeared, the Evil Queen created illusions of the princesses so she could rule through them. Veronica knew the Mermaid on the council was a fake because she saw her sister disappear before her eyes.

After Cinderella escaped the prison carriage, she made her way to the shore. The calm sea was disturbed by a large wave. After it crashed on the shore, Veronica appeared. She told her story and asked Cinderella if she would find her sister in the Real World.

Cinderella rescued the Little Mermaid and the sisters were reunited. They sent Cinderella to Red Riding Hood's grandmother. 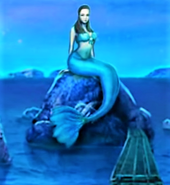 Veronica on the left
Add a photo to this gallery

Retrieved from "https://mermaid.fandom.com/wiki/Veronica?oldid=22056"
Community content is available under CC-BY-SA unless otherwise noted.